Our Story ( in short)

Guerrera is a family business, started by us,  a couple of foodies who worked hard,  turned pro, got in very deep  into the restaurant business in Cebu , and then in search of more balance, left it all behind for a rice farm in Camiguin.   We have strong convictions about cuisine , which are sometimes in conflict with today’s dining climate, and the name Guerrera was chosen to embody that fighting spirit.

Traveling , above all,  has convinced us that world class cuisine exists in some of the least likely places…

… and we are determined to make believers out of you too. 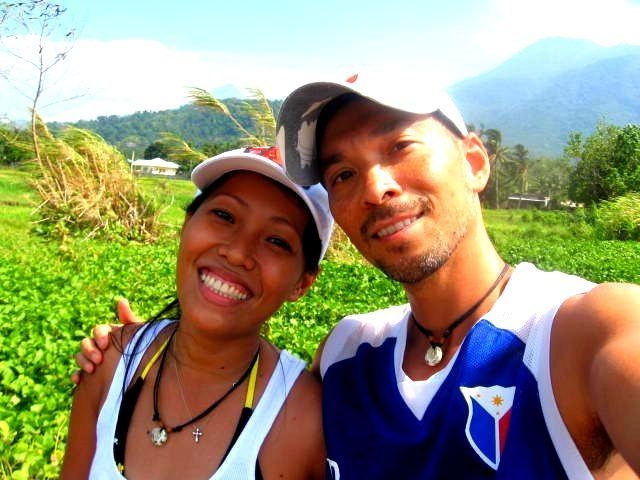 About pigs and chickens 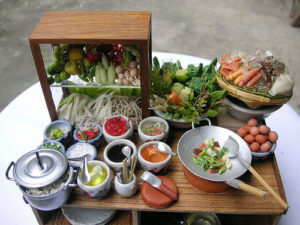 In a breakfast of bacon and eggs, the chicken is said to be involved, whereas the pig is totally committed. Most of the world’s restaurants are owned and operated by chickens, but long before we ever cooked for a living, the places that attracted us the most as diners were those where passionate pigs put it all on the line.

Whether it was a street vendor in the alleys of Hanoi or a small family-run eatery on the west side of Chicago, chef-owned and driven eateries always seemed to have better and more interesting food. So what if their earnings often fell far below your basic chain restaurant?

It’s not to say that numbers are not important. They are. Even pigs know that. But they also know that if you want to find happiness in this crazy business, then passion for the culinary arts is just as essential.  If you have that, and you don’t do something completely stupid, the numbers will take care of themselves.

And now for something completely stupid

Question: If you are going to build a restaurant for foodies and fellow pigs, most of whom live in western cities, why would you choose to locate it about as far as you can get from your target audience, in a place not typically (if ever) associated with these kinds of eateries, where there are no suppliers, few tourists, and you’ll basically have to grow everything you need?

Answer: Camiguin is remote but that’s what has kept it ridiculously beautiful and it was important that we enjoyed living in the place as much as we loved the work.  And there is considerable precedent in this ( stupid)  business mode1… many of the world’s best places  to eat take some effort to reach… probably because pigs seem to think there is more to contentment than a corner lot in some rich chicken’s shopping mall.

Travel is the best education 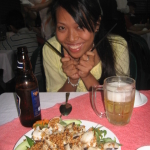 When we got married, the majority of our free time was spent in and around food. Get the work done, pay the bills, but then it was play time in the kitchen time, all day, all night, all weekend.  We made travel the only priority and when we landed in some Asian culinary capital, there were no selfies in front of temples or water fountains. Just eating and watching and learning everything we could, from sun down to wheels up. When we got home, practice, practice, practice… and in time we got pretty good.

With the idea of Guerrera kicking around, eventually one of us had to get even better and Carmel applied and got into Le Cordon Bleu’s professional Thai cuisine program in Bangkok. Forget its generally stellar pedigree, as soon as they told us that the (sort of outrageous) tuition was non-refundable and that they would kick students out for even being late to class, we knew we had the right institution.  In a batch full of pro chefs and restaurateurs from around the world, Carmel, a self taught home cook from the Philippines, finished far ahead from where she started. 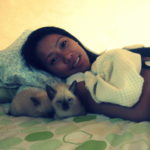 To go back a step, all of this almost didn’t happen. While cooking was always big in our relationship, before we really took the big leaps into it, we did everything we could to become parents. We later found out that both of us have medical conditions ( what a pair!), and it wasn’t meant  to be. We took some time to recover, particularly Mrs A, who had taken a 6 inch needle to the stomach, every day , for weeks… just to get to that point, only to have the doctors deal us the truly big blow days later. And it was Christmas time!

Well, we bounced back.

And with one road now fading from view,

alighted by our other shared passion.

And onward together we went.

Wasting little time, our first restaurant was opened within a couple of months of her return to Cebu and we literally had one table, one wok and cousin 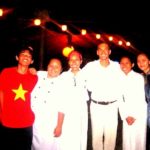 Cha-Cha to help us out. A few other cousins dropped in to wait tables after their day at school. I was the only customer for a whole month, coming home (as we lived above this decidedly hole in the wall restaurant), I pretended to be a customer and they pretended not to know me. I was a good tipper too.

This surreal scene was repeated over and over but it had sound basis: it was all meant to be a dress rehearsal for Guerrera that would soon open in Camiguin. That was always the main target. The land was already purchased and we were designing the house. In the meantime, the idea for Little Saigon Big Bangkok was to practice as much as we could in as realistic a setting as we could reasonably create. It helped that the cost of opening a business in Cebu was relatively easy and inexpensive. (closing it is the hard part, but that’s another story.).

Then on one of those days where I entered to be our only customer, I found a garden full of people waiting, in line, to be seated. Someone had blogged about us and the secret had gotten out. Uh-oh, what do we do now? Time to buy more tables, and chairs, and plates and on and on it went. 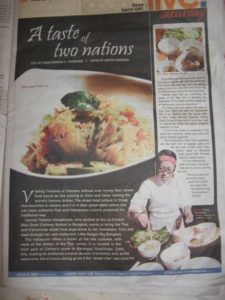 The hole in the wall gets more walls

Within a month, we had 100 seats, then a 2nd location, then a 3rd.  The last one we opened was #8.  We fed a lot of people and if one is to believe many of the  diners who came through, they felt our restaurants were pretty special. We laughed at the algorithmic absurdity of online rankings, where we stood at the top in a city of over a thousand restaurants but we took seriously the appreciation and words of encouragement from the many chefs and real foodies who came. All of this mattered and it was great to see the dining rooms full, but more importantly to us, we’d already exceeded our own goals.

We opened with about 6 pretty standard dishes on our menu but the more we cooked, the more we were inspired to create. We made a million mistakes but we never stopped learning. We moved rapidly through our original list (mostly from Thailand and Vietnam), then on to cuisines from other Asian countries, then finally to creating our own dishes and styles that grew from our ever-expanding curiosity. A huge culinary world that had always been there was finally visible and we had walked through the door. 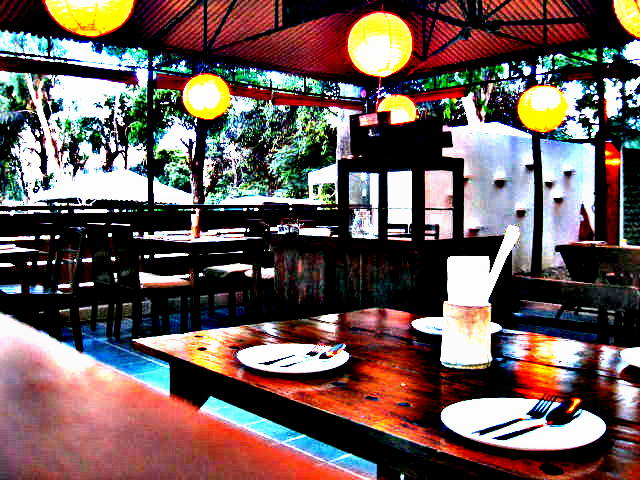 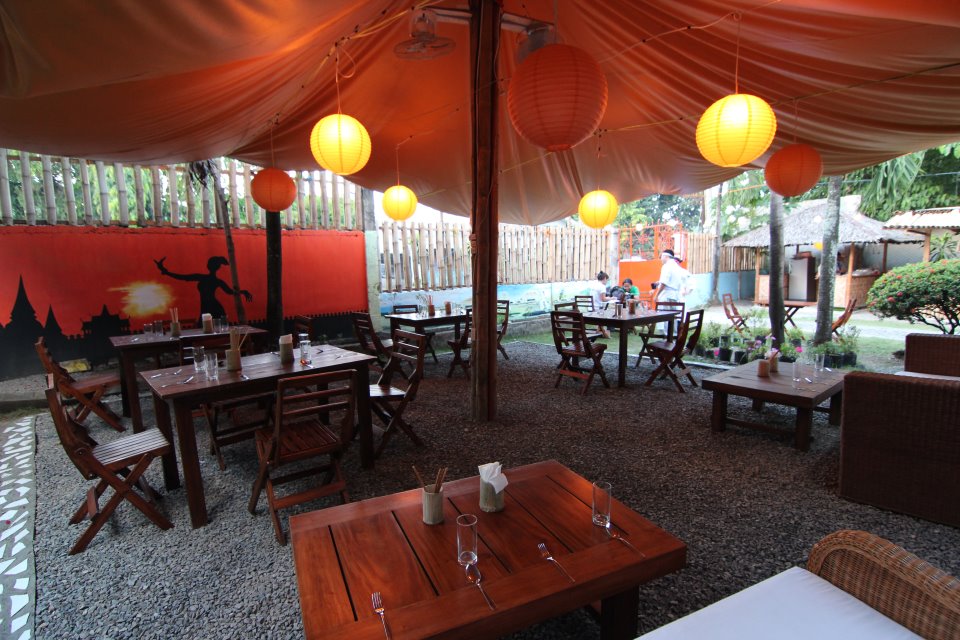 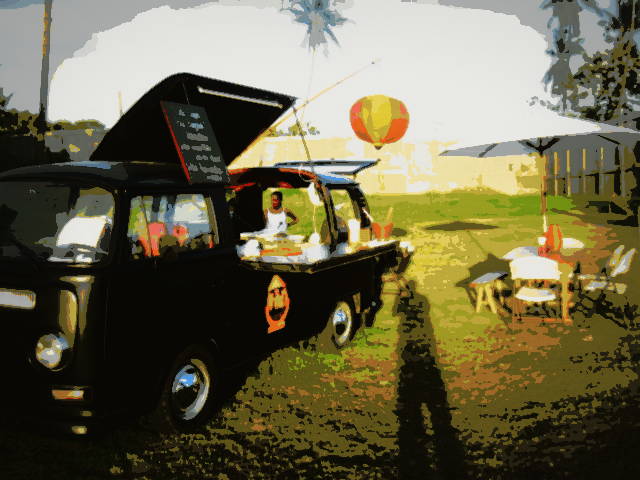 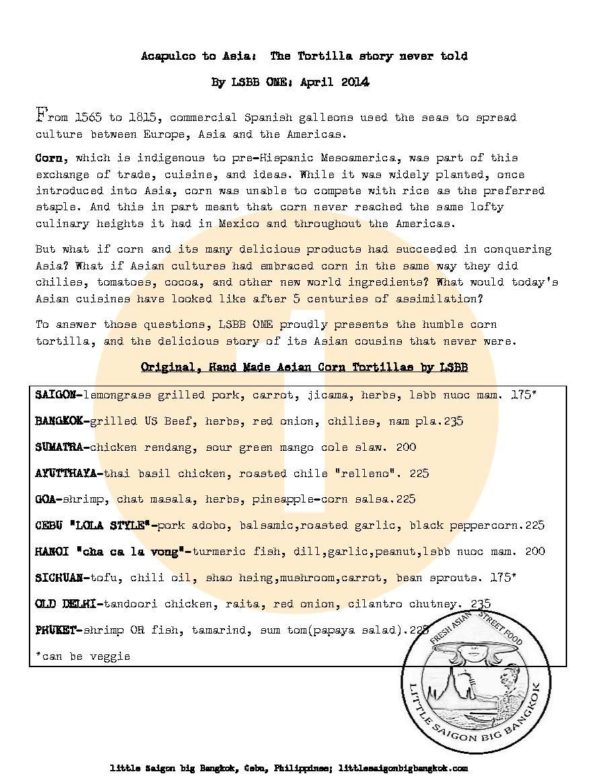 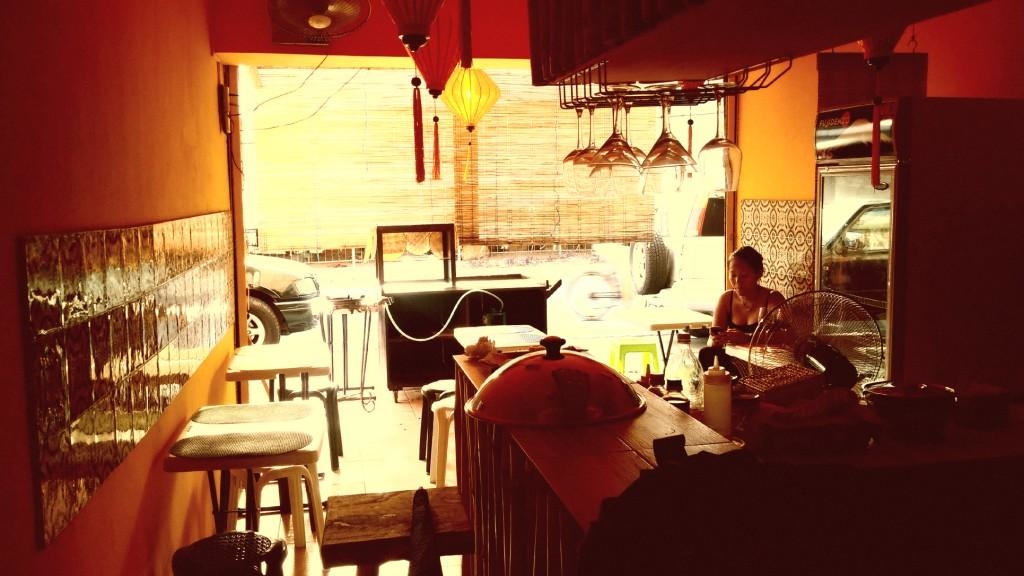 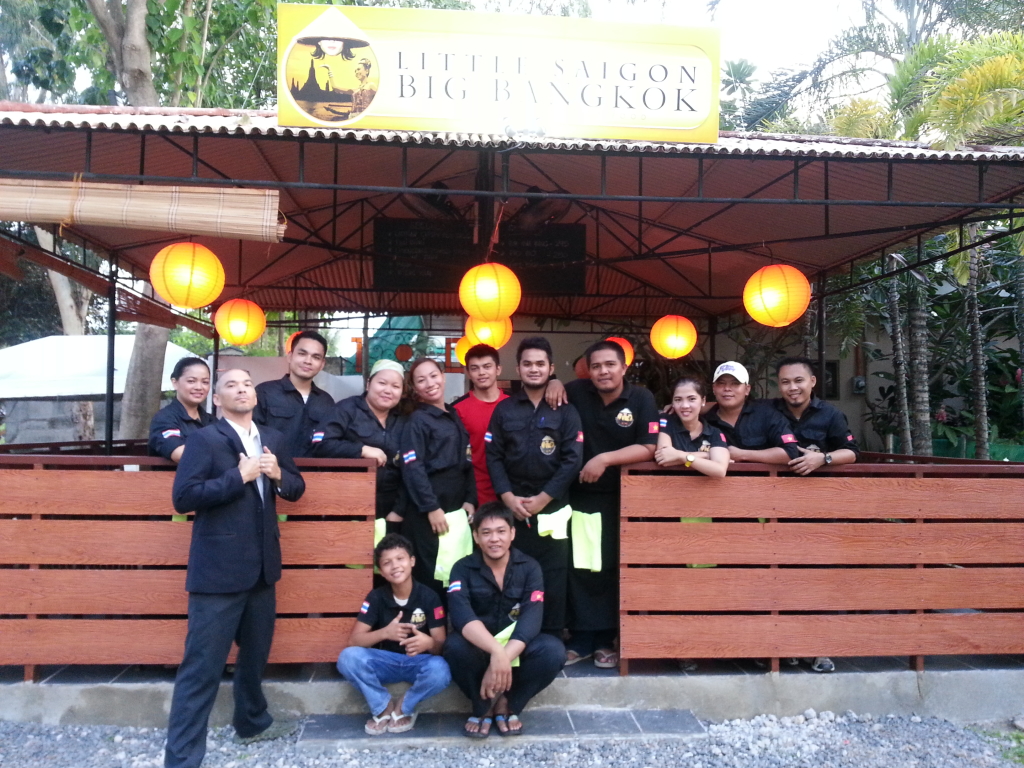 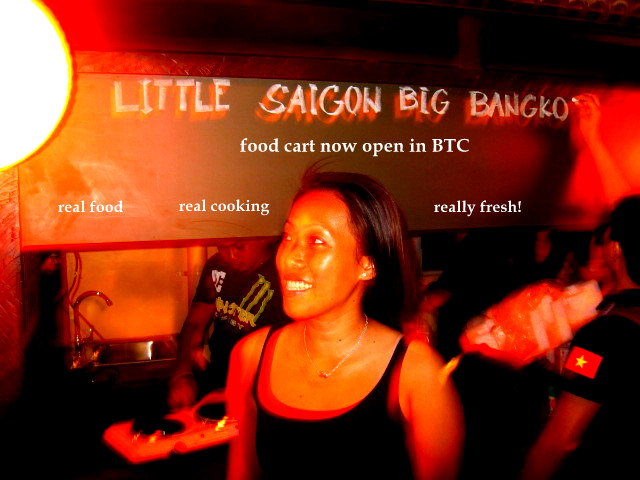 There was a price to be paid, however. They never tell you that on the cooking shows and foodie blogs. 4 years went by so rapidly that what remains are just a blur of images of a life spent in constant movement and in a state of perpetual fatigue. We lost almost all of our free time, much of our health, and had gained more than a few lines and grey hairs.

In exchange we found our own unique direction in the kitchen and equally important, had solidified our identity as restaurateurs. There was not a job in the business we could and would not do. We were always up front, in back, and ran through all the seams. When something needed doing, we did it, as a family, not as a cog in some mega hospitality group. All around us, everyone was just copying what someone else was doing and we refused to go down this route. Instead, we created the vision and executed it by ourselves. We were what we had built.

We had become pigs.

Fork in the road. 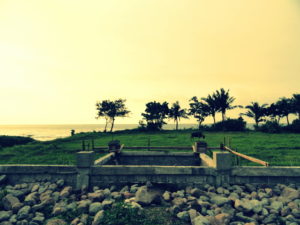 While things continued to roll in Cebu, we had totally lost sight of Guerrera in Camiguin. Not only was there just a skeleton of a home in the ground, we had no plans to occupy it. We tried to do both and attempted several ways to reorganize our Cebu operation so it could succeed without us being so involved.

Some of these could have lasted for quite a long time, but we had always reached for something more than the middle. Whether someone was watching or if we were alone, whether there was any recognition or just silence, we had become the ultimate barometer for our product.  And for the first time ever, we weren’t happy with what we were serving.

It came once again to the point where we had to choose one or the other, and this time, we fully committed to Camiguin. It was there where we always felt less stressed, and could more fully indulge our creative impulses.  We would leave behind Little Saigon Big Bangkok, and after 5 years, finally create Guerrera. That’s not to say it was an easy decision to shut down everything we’d worked so hard to build. Loyal customers were, to put it mildly, confused. And rightfully so.

And all we could say is that these pigs needed some rest.

And that’s why Chickens dominate the world. They do not create. They do not invest themselves.  They let the pigs  do that and when a model succeeds, they simply copy it.   That’s also why the restaurant landscape is filled with homogeneous entities, none really much different than the next.

Forged out of our highs and lows in the restaurant business to date, the name Guerrera was chosen to represent the resilience and fighting spirit that had developed in ourselves and our struggle against a restaurant world that we increasingly felt had its priorities backwards. Perceptions of value, quality, uniqueness, creativity, and that “ do it yourself, do it from scratch  attitude” —all the things we had come to care about—we’re losing the battle to marketing hype, short cuts, cookie-cutter dining concepts, and the eat-all-you-can mindset.  And within our own market, there was a prevailing tendency to localize all international cuisines so they would appeal to the Filipino palette.  As if we have something to teach the rest of the world about their cuisine. On the flipside, we bristled when people said that Filipinos could never cook “authentic” Thai food. We rebelled against all of these self-defeating  concepts (as in on a national scale) from Day 1 and today they still remain at the core of Guerrera. 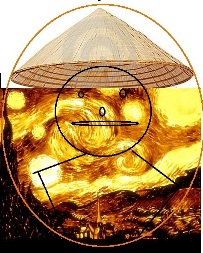 A call to all adventurous diners

Guerrera is just a restaurant but it has also become a destination, an outpost, for like minded people looking for something more, something special, something adventurous, and most of all, something of substance.  Admittedly, we are not the same kind of place we used to be. Things are scaled proportionally this time and we have made changes so that we won’t ever misplace another 4 years of our lives again. But even if we are not always present and out front, you can be sure that for every experience you have at Guerrera, there’s been a pair of passionate pigs behind it. 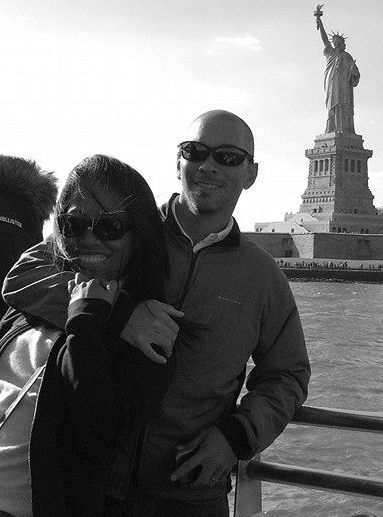